The song "Magic' was written and performed by Jacob Wheeler

as the closing theme for the Original Soundtrack of the Japanese Animated film "Gundam 0083." 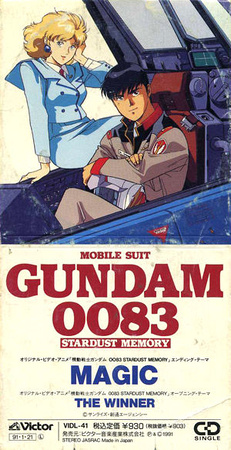 Years ago, I watched Mobile Suit Gundam 0083: Stardust Memory, and fell in love with the first ending theme song. Several years passed, and I decided to try looking up the artist to see if they had done anything else. After a few years of hit-or-miss (mostly miss) searching, I finally stumbled upon a web pagecreated by Jacob Wheeler about his song, “Magic”.

I contacted him regarding the song to see if I could find out more about the process and his memories of the project. At the time of the project, he was living with his family in Tokyo while working as a magazine model, nightclub singer, and backup singer for various Japanese singers.

He spent about six years in Tokyo, living in Takadanobaba and then Harajuku. During his time in Japan, Wheeler appeared briefly in Beppin no Machi(べっぴんの町), a Japanese suspense film starring Kyōhei Shibata and directed by Takahito Hara (原隆仁) and went skiing for the first time.

Bobby Watson, a producer and the bassist for the band Rufus with Chaka Khan, put out a call for singer-songwriters in the area because Sunrise was looking for songs to use in a new Gundam series. After providing Watson with several of his own songs, his song “Magic” was selected, and Sunrise wanted Wheeler to perform it. Jacob Wheelersaid that he “began [his] relationship with Sunrise through this song.”

Wheeler’s inspiration for the song came from several friends who were having relationship troubles. Rather than writing the lyrics first, he worked on creating a mood with the chord changes. This led to the story and subject he was trying to convey, and everything “kind of fell into place,” he said. Because many of them were “getting into [their] relationships for the wrong reasons”, he wrote the song because he thought there should “be ‘Magic’ when your hands touch!” He said “the song wrote itself.”

When recording “Magic”, Wheeler spent about half a day recording the vocals and guitar solo in the studio with Watson. Watson spent additional time working on the song in the studio in order to produce the final version heard in the anime series and on the CD single release. He really respects Watson, calling him “an amazing arranger [and] producer.” Though involved in the production of this series (through his theme song), Jacob Wheeler has not watched any other Japanese animationseries.

The OVA series was released as as 13 episodes from May 1991 to September 1992, each about 25-30 minutes long. When the series was compiled into a single two-hour film in August 1992, Wheeler was asked to help promote the film at the premier event. During the event, he sang the song to a minus track while providing some piano accompaniment before the film was presented. While at the premier, he met some of the production staff from Sunrise.

Prior to Stardust Memory being released in 1991, Jacob Wheeler wrote the lyrics (with David Wyman and Hideyuki Yamamoto) and composed the music for “Mō Ichidō” (もう一度), sung by Takako Ohta (太田貴子). The song was released on the 1989 album Magician and rereleased on the 1991 album Love Ya. He performed a duet in this song with Ohta (best known for voicing the title character in the anime series Magical Angel Creamy Mami). While this is a love song, it is quite different from “Magic”.

He then composed the music for the song “L.A. Blue” on the 1990 album Chepopby Rie Miyazawa. Except for a a few measures at the beginning—and a slightly different arrangement—the music is almost identical to that for “Magic”. The lyrics are not a translation of those from “Magic”, however.

After leaving Japan in the early 1990s, Jacob Wheeler pursued non-musical interests, due to having a family to support and not finding the work he needed in entertainment. He worked as a stock broker and a travel agent. He managed multiple bank branches for Citibank, wrote a few screenplays and some poetry, and produced photography books. He plans to publish some of his works in the future, but doesn’t have a specific timetable for that. He has recently gotten back into singing and acting, most recently performing a one-man play titled The Erotic Life & Times of August Jones at The Duplex Cabaret Theatre in New York City.

If you want to learn more about Jacob Wheeler, please visit his website.*

I hope to do more articles like this in the future.